Historically there were three different ways to create an asset that had slightly different steps depending on where a user started. This release standardizes on one create asset user interface that includes using a template (optional), starting from a device (or picking a device based on the template), or starting from scratch. The same interface is provided no matter where the user starts but auto fills out as much information as possible based on that starting location. For example, when creating from the device overview page, it will automatically pick that device.

New dashboard panel for viewing files and other content associated to assets. This panel supports being configured for one of the following options:

A dashboard panel that allows users to upload a formatted SVG image and allow text to be mapped to signal values, and shapes to change color based on signal status.

Note: The Dynamic Image panel is not enabled by default. Administrators with feature control access can enable this.

Adds a new dashboard panel for highlighting a value or interpretation of one or several signals, allowing flexibility in regards to the name, icon, colors, and text shown. Can indicate good / bad, running, not running, etc. This is also useful to show multiple asset signals on a group dashboard.

All three gauges have a consistent configuration now and we have added the ability to turn on major/minor ticks and to even set your own major and minor ticks.

More information can be found here

For supporting multi-tenant use cases, this advanced feature allows for groups (companies, organizations, etc) to set their own theme / brand. Users under this group in the hierarchy will see this custom theme when they log-in and also on their initial invitation email. Each group can choose to turn on this feature for child groups.

To enable this feature, please talk with your Customer Success contact at Exosite or email support. Once added to your ExoSense instance, administrators can choose to enable it in under the Setup Features tab. 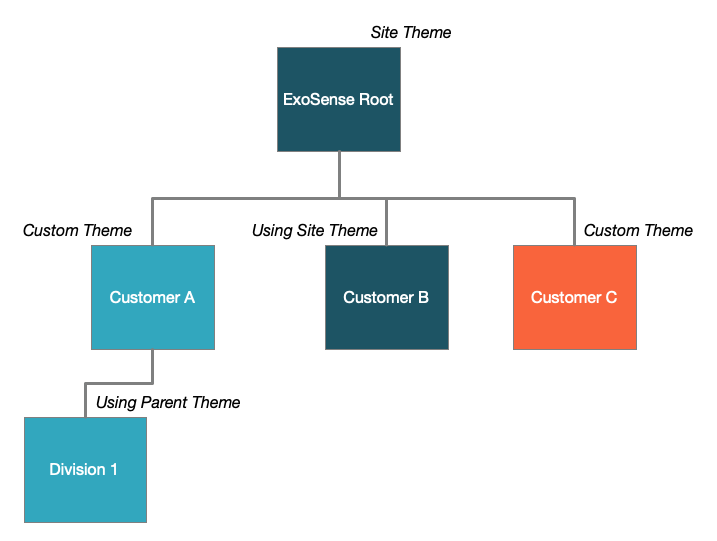 This new functionality provides a way for users to make control requests down to devices from the dashboard UI. Example use cases include making a request to close a valve, sending set points, and sending a command for the device to take a troubleshooting action.

The device control functionality is disabled by default and can be enabled by Admins in the Setup -> Features tab.

1) Devices that support control requests from a remote platform require extra attention spent on making sure the device always operates safely and can locally make decisions that would override the remote request. It is on the device hardware and firmware developers and installers to be sure equipment does not blindly take control requests and take action without looking at safety factors and being able to override remote requests.

2) It's important to design and plan for devices that may go offline or have long latency or spotty network connections. Devices must be designed to function independently without remote platform control requests.

Users have the ability to upload documents and files for assets such as user guides, schematics, images, etc. File types supported include PDF, Images, Text files, CSV data, video (YouTube links only at this time), and URLs.

This feature also supports the ability for devices to upload content through the device API and have it associated to any Assets already using channels from the device. Please contact support for more information on uploading content from the device API, the reference material has not been publicly released yet.

The Asset Content Files feature is disabled by default and can be enabled by Admins on the Setup -> Features tab.

Asset lists, views, and map views now are able to show timeout status for Assets. The timeout status is based on any source device channels timing out, meaning that the channel has not received data in the amount of time specified by the channel's timeout property. Note that the timeout indication will show if any channel from the device has timed out.

This feature is disabled by default and can be enabled by Admins on the Setup -> Features tab.

ExoSense allows Admins to set the default Asset and Device icons used throughout the application. Each provides a list of options to choose from. 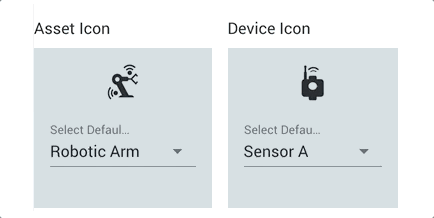 Users can also set specific icons for each Asset, changing it from the default to another icon. 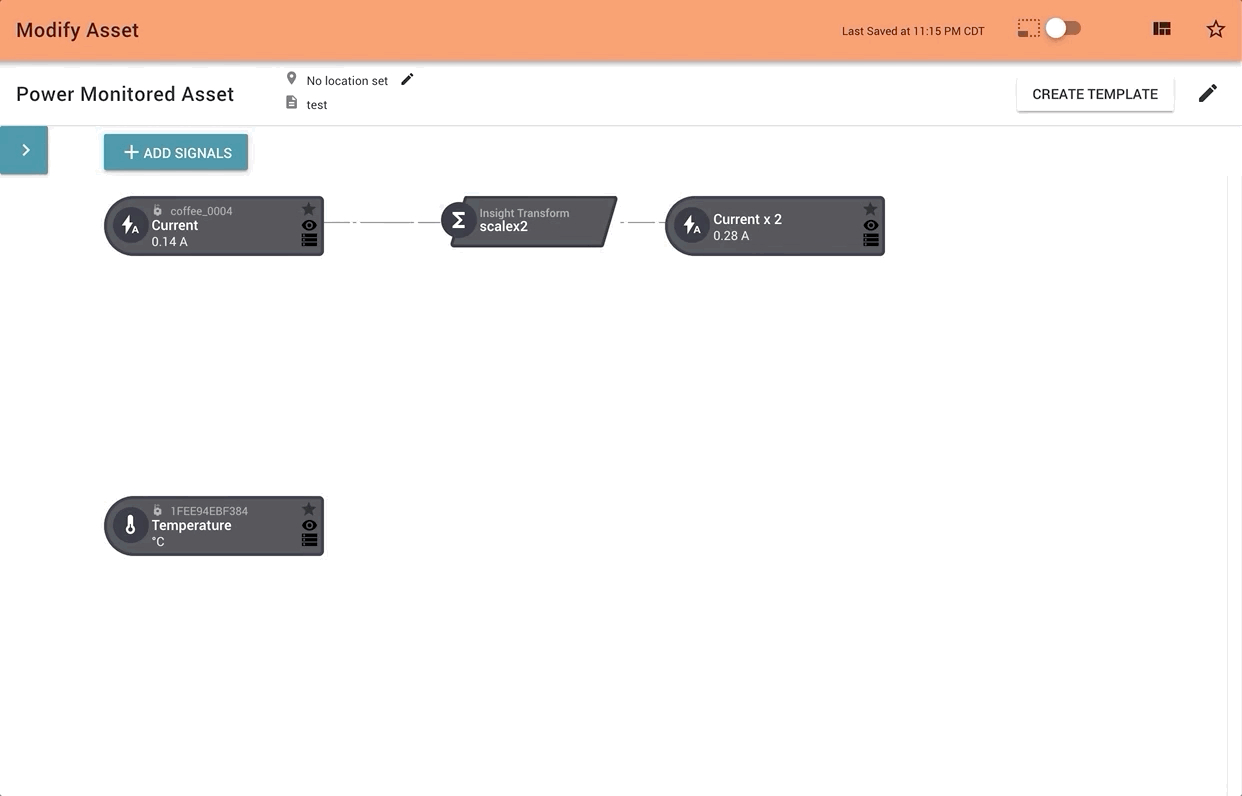 The Data Sources Tab allows Admins to see which Device IoT Connectors have been enabled to be used as sources for the application.

There is one more new setup tab that provides enablement for turning on/off features. The list is small but will be expanded as new functionality is added and also enablement flags are added for current features. This will allow administrators to choose if and when certain features are available to users.

Added a side-navigation item called Shortcuts. These replace and improve upon the former ‘Dashboard Favorites’. Shortcuts can be made from any page and allow for a customized name for the side nav. 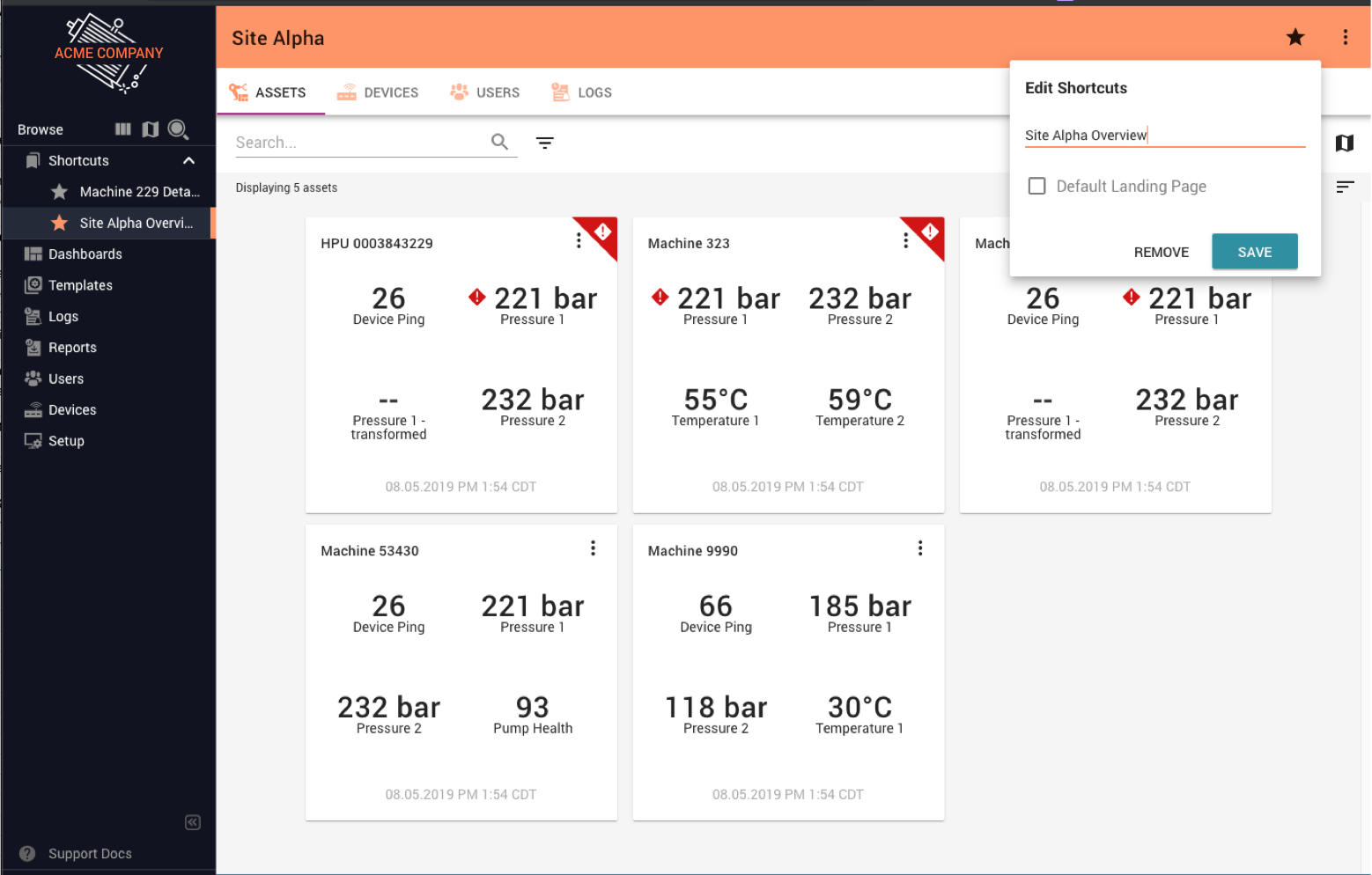 The list of standard rules has expanded. Boolean Rule (Boolean) Evaluates a Boolean signal type and allows setting a status for true and for false values.

Is Equal To (Numeric) Allows a user to set a value to compare a numeric value against. If any match it will set the status to whichever status value was set for that comparison.

Contains (String) Formally called "RegEx (String Comparison)". This is an update to the former Regex String Comparison in which the rule name now properly matches the actual functionality. This string rule will perform a substring search for the specified string inside of the last value. 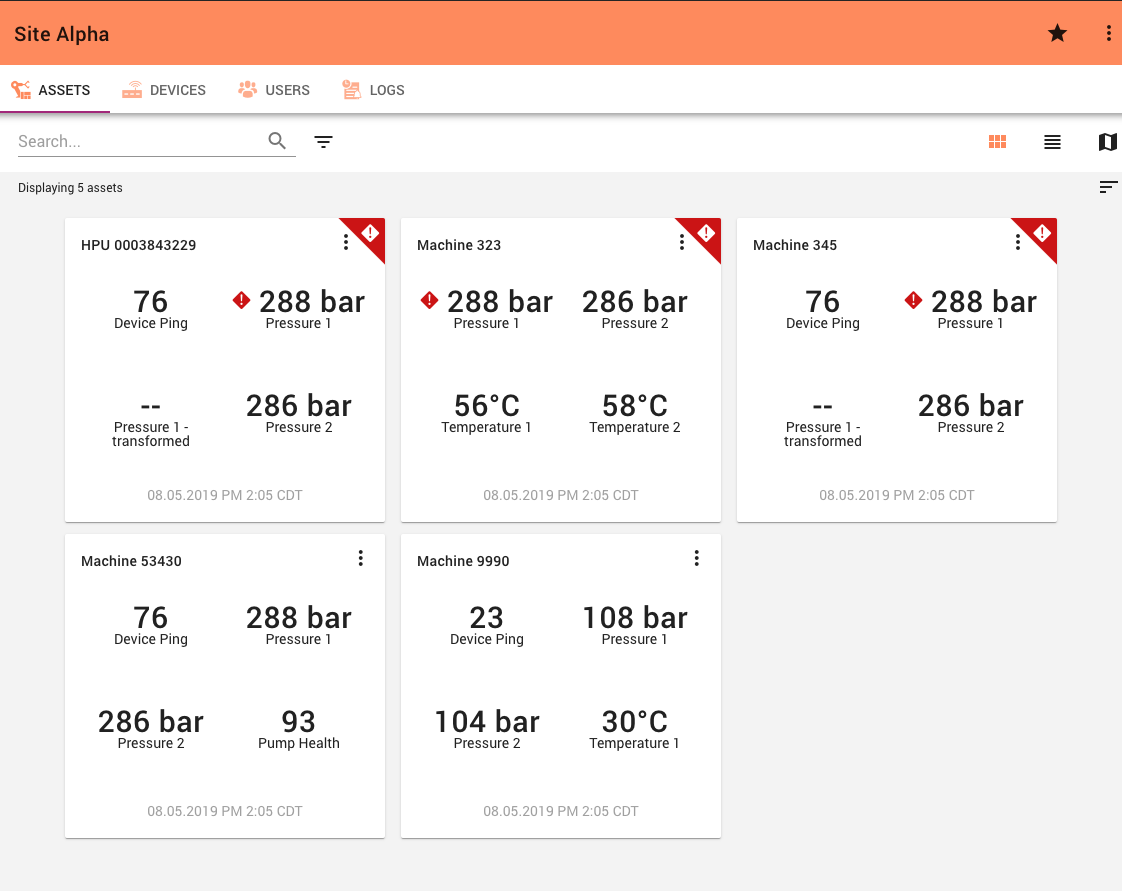 The asset configuration window for creating and editing transforms and rules has been updated to support expanded functionality for custom insights, both transform type and rule type.

Important Note: The standard Threshold rule interface has changed as it is built the same way custom insights are created and thus uses this dynamic form interface

Simulation Templates / Customization Users can choose a type of simulation or create their own data patterns using a .csv file. Examples are available as starting points.

Cloud based These simulations run in the cloud which means users do not have to install any local tools and development environments. It also alleviates the problems with prototype hardware and computer based simulators that fail or stop running with your computer turns off.

The cloud simulation tool is available from the Murano IoT Exchange to deploy as a product solution. 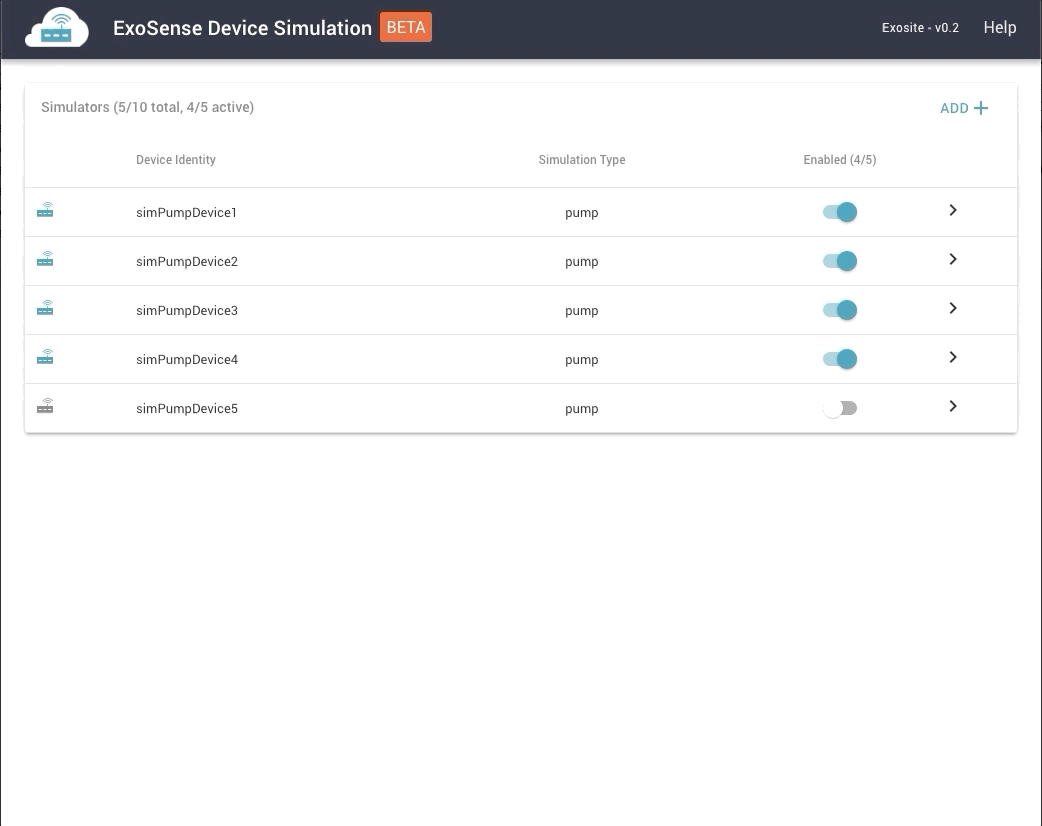 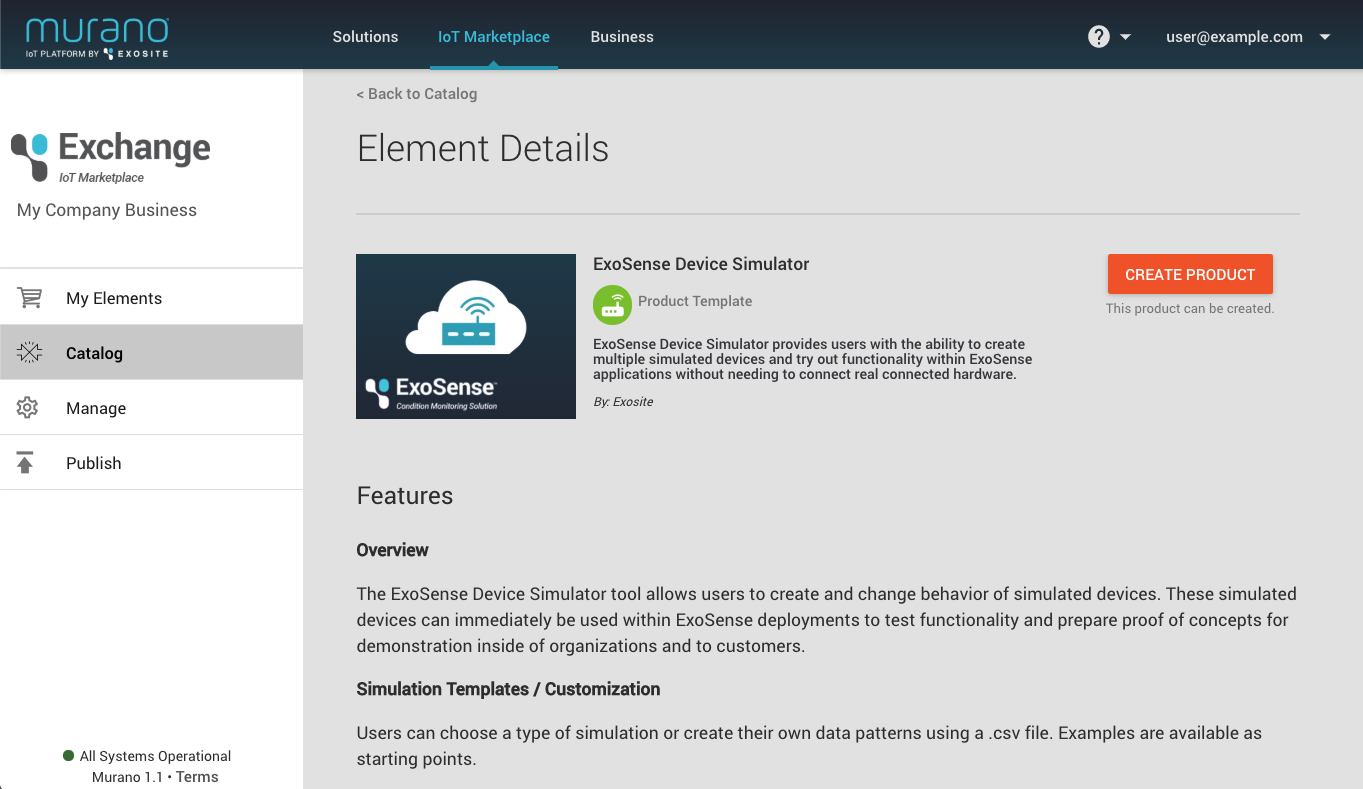 There were additional backend and pipeline updates that will allow future functionality to be added such as improvements to asset statuses, timeout events for signals, boolean rule, and improved transform / rule experience.

ExoSense has a greatly expanded list of data types and units that are now available and supported. You can find the complete list in our public Industrial IoT Schema repository, which is now publicly available for version tracking. The specific Data Types / Units specifications document can be found at https://github.com/exosite/industrial_iot_schema/blob/master/data-types.md. 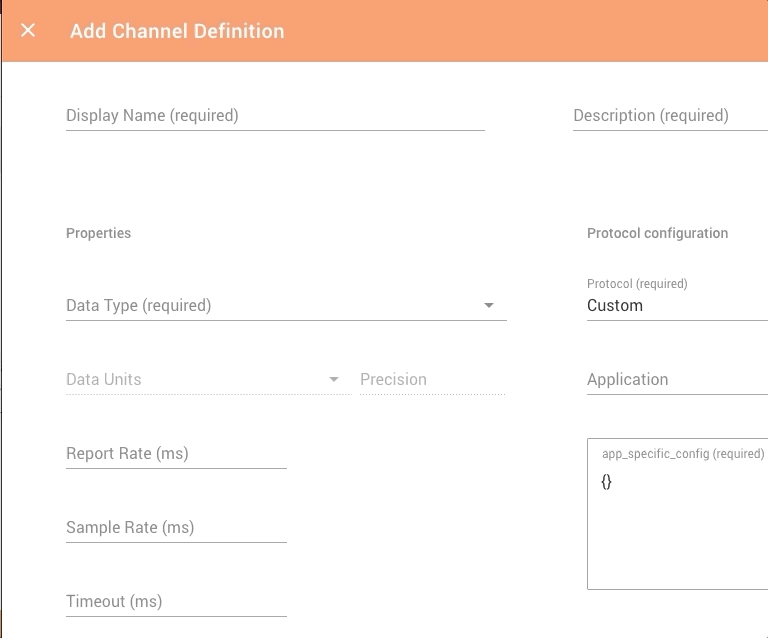 Device Channel Historical and Logs We’ve improved the channel value / timestamp viewer on device overview page to show the last value and timestamp for a channel no matter when it was sent (within 2 months). Previously only the last data_in packet channel values were shown.
We’ve also added a Log tab that shows the last 500 data_in and config_io packets sent by the device to help with troubleshooting and early device interface development. 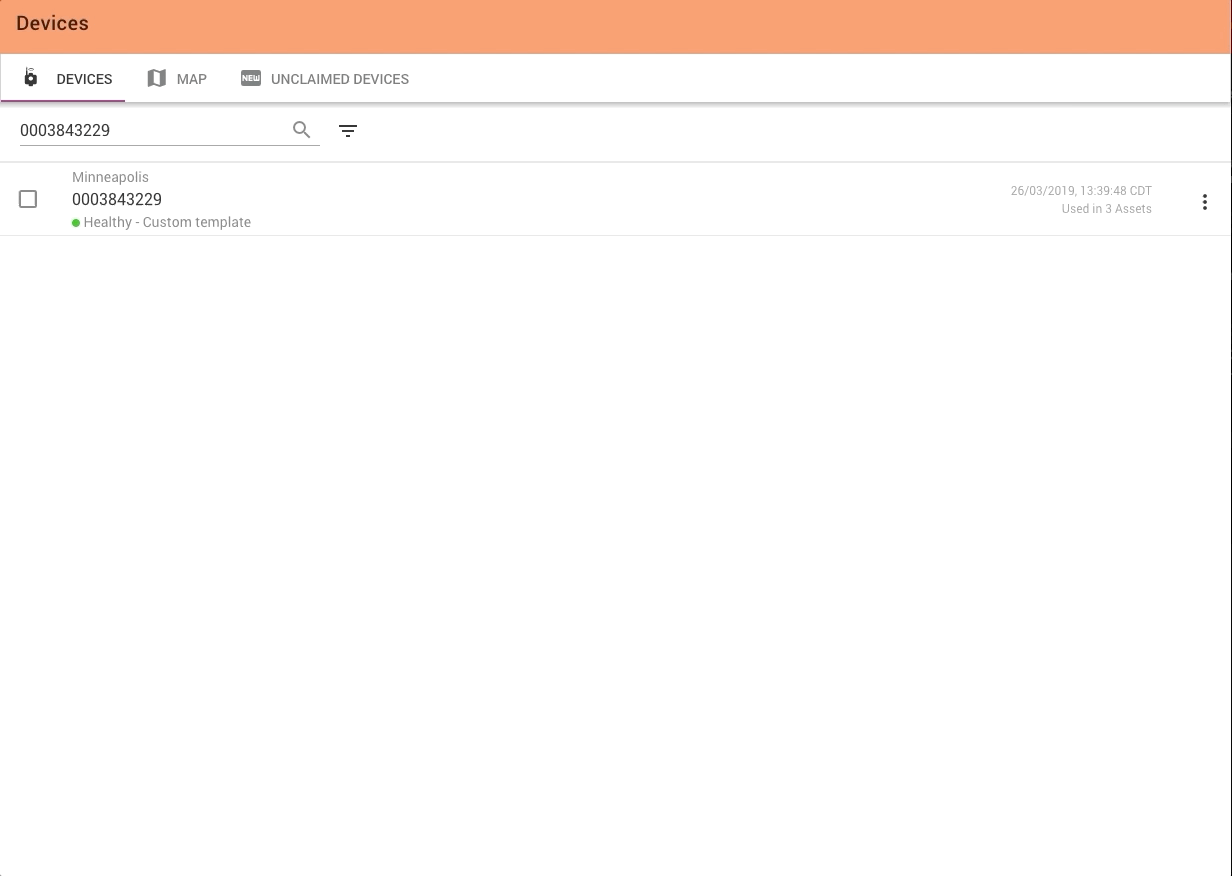 Channel Configuration Improvements We have a number of user experience improvements in the channel configuration for specific protocol parameters that are available, the majority are for Modbus TCP and Modbus RTU channel parameter selection.

Locked / View Only Channels Individual channels or the entire configuration (all channels) can be locked, which will make the configuration view only. This can be used by OEMs building devices that are not remotely configurable through the ExoSense user interface. Please see the Channel / Signal Interface Specification for more information about this config_io property. 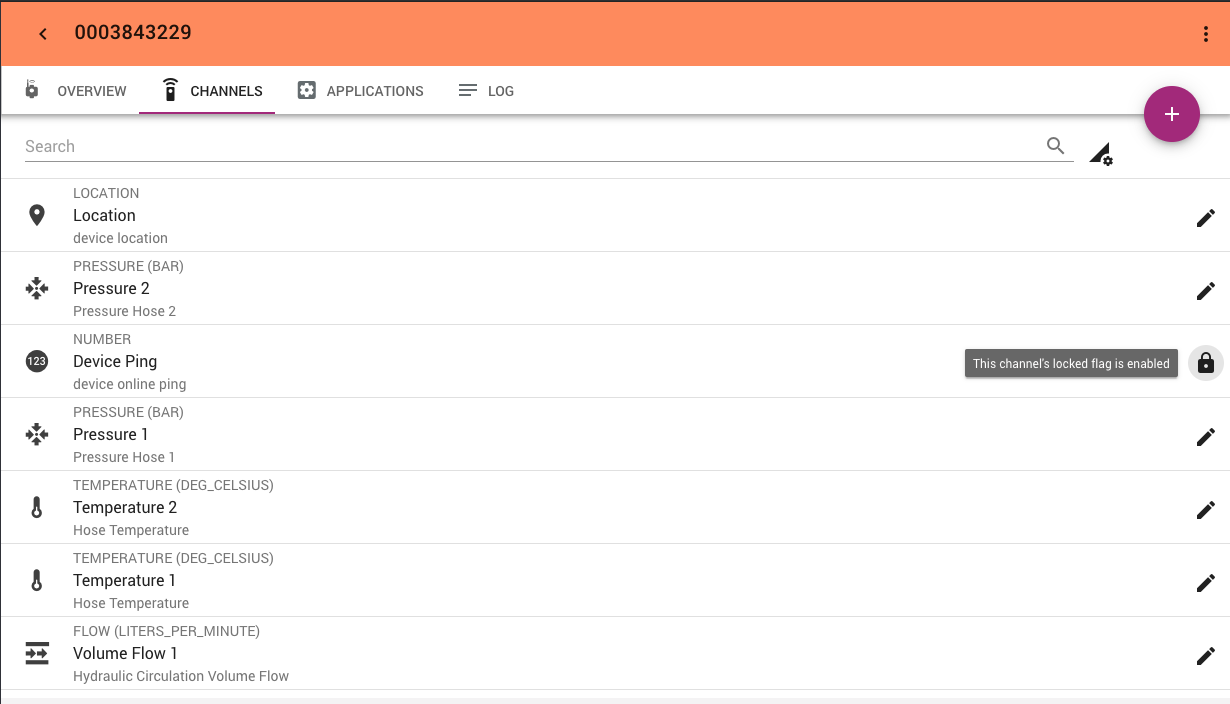 BETA: Device Interface Application Config Tab For organizations building remotely configurable devices, we have added support in the UI to configure the config_applications resource, which allows users to specify protocol and other device client application settings.
Note: If you are interested, please contact us for more information.

We've added a new way to look at a group. These new views offer fleet view and management functionality including a new tile view for assets. When in the Group view, you can view and manage assets, users, devices, logs, and dashboards if you've created a group dashboard. 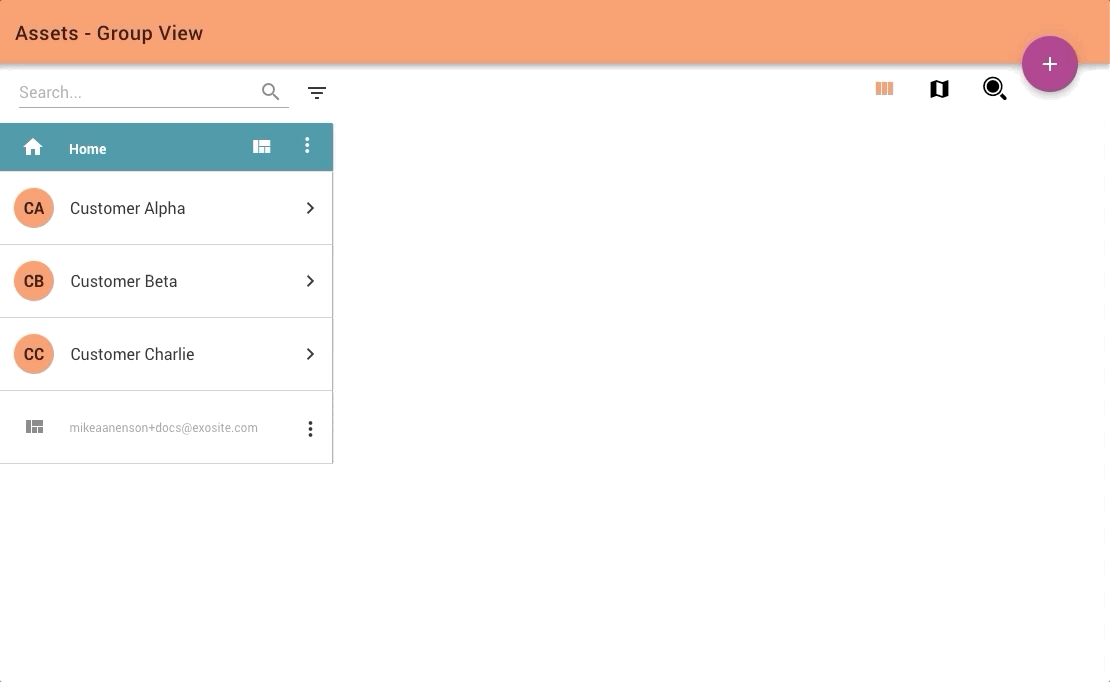 The following filter, search, and sorting updates were made throughout the application to be consistent and take advantage of the new server side capabilities for performance and scale.

Asset and User Lists now provide a sorting feature that does server side sorts rather than sorting what is in the browser window. This ensures that the sort includes all possible candidates for the list.
The default ordering for assets and users is alphabetical order A to Z. 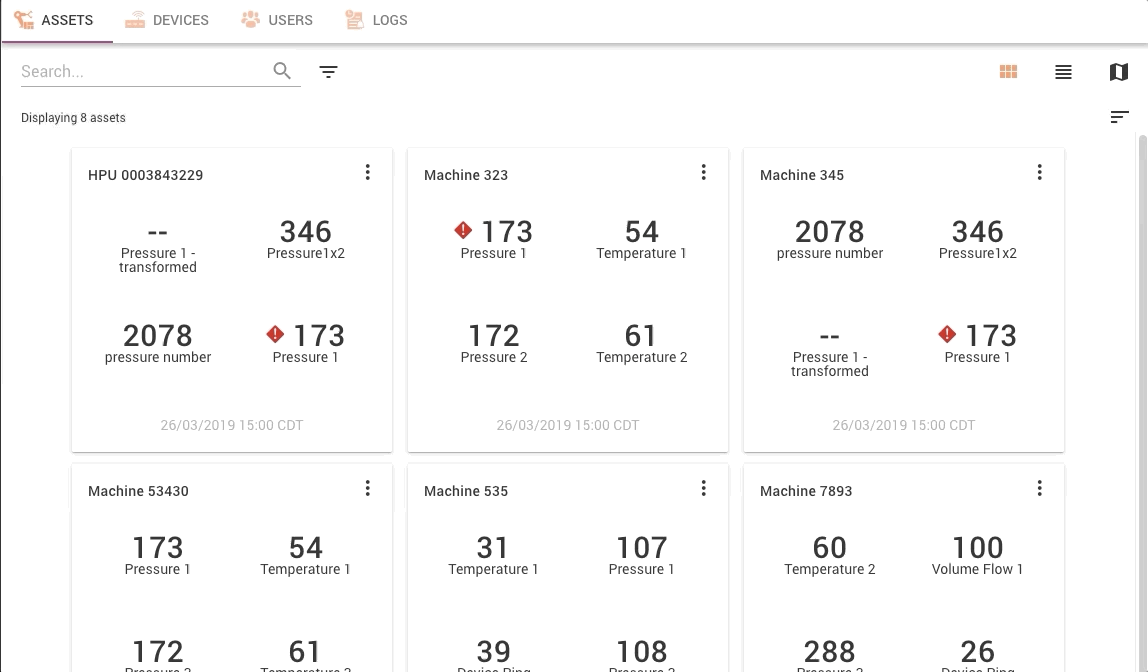 List views provide filtering options dependent on what you are looking at (assets, devices, users, logs). The group filters are applied at the same time, so if you want to look for devices that have been assigned to a specific sub-group that are not yet provisioned, you can. 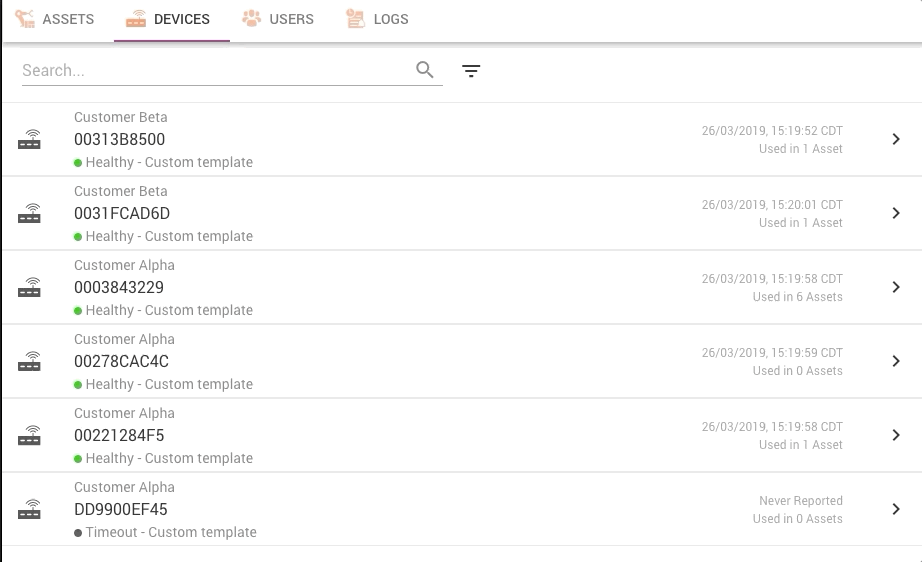 Users are now able to choose internationalization preferences such as Date Format, Time Format, and Number format. Out of the gate we now offer Japanese language in addition to English and will be continuing to add support for other languages in future updates. 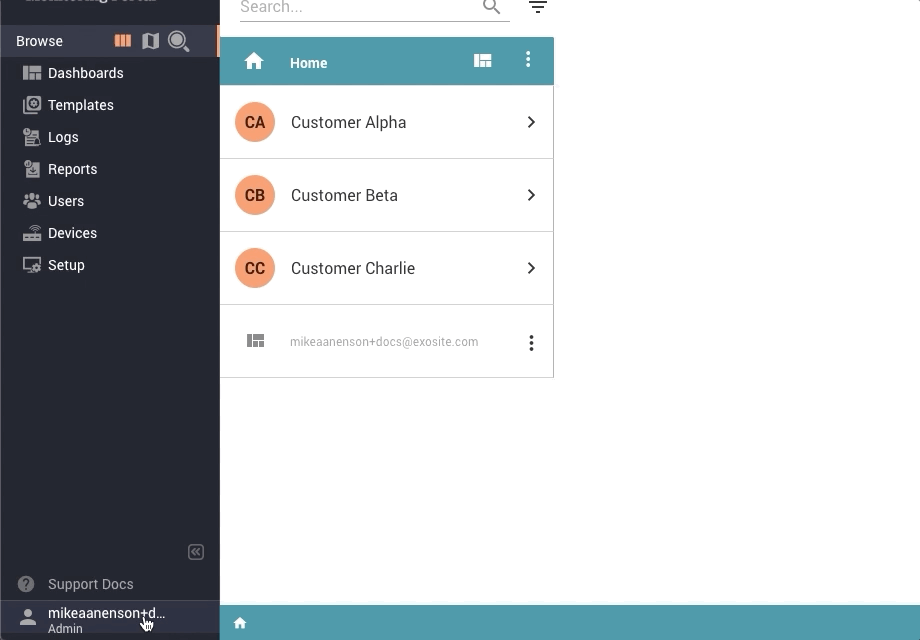 The Image Overlay panel has historically supported signals. Now it also supports Assets. Assets on an image show asset status and the ability to hover to see favorited signals and click to go to the assets dashboards page. 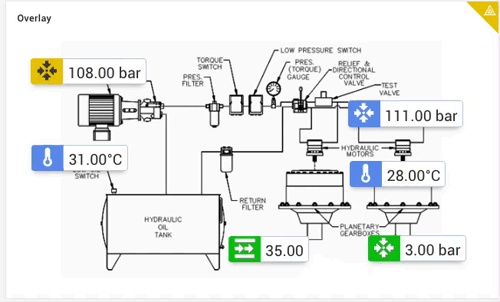 The application will provide status indication when it detects it is not connected to the server, such as during a bad network connection. A message is provided when reconnected.

The complex chart supports up to 10 Y axis ranges / signal types now. In addition data gaps are configurable (default is 3 times the signals report rate). Horizontal grid lines can be turned on and a Play/Pause button is available for controlling live data updates.